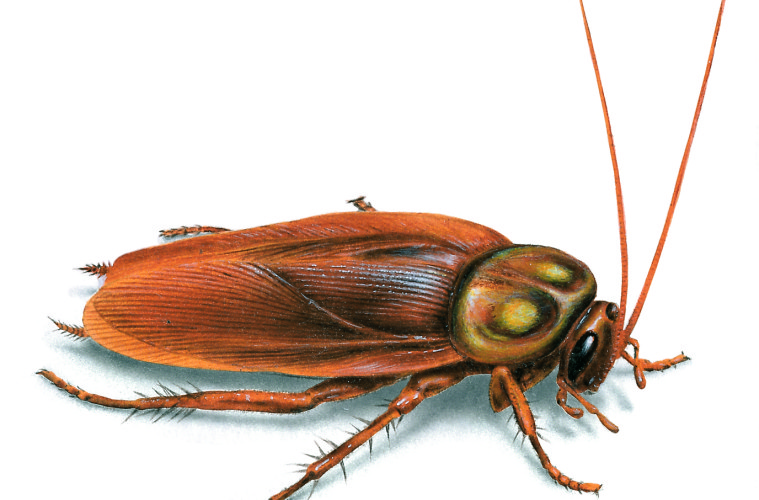 There are only two types of cockroaches in Washington: Americans (Periplaneta Americana) and Germans (Blatella Germanica).

Fittingly, the American cockroach is the BIGGEST of all the world’s roaches; they’re the ones you see on the sidewalks, the giant fuckers that can fly. Despite their name and their prevalence, the American cockroach is not native to America, though they couldn’t be a better symbol for the United States. They originated in the jungles of tropical West Africa. And like Americans themselves, they were imported here en masse in the crowded hulls of wooden ships beginning as early as the 15th century. There is some evidence of American roaches in North America prior to slavery, but the slave trade greatly accelerated and exacerbated America’s cockroach problem. Countless billions of native West African roaches were brought over in slave ships, destined to curse our country for trafficking in human flesh.

Once established on the East Coast, it was manifest destiny for the restless American cockroach. As white people filled America’s fruited plains, they displaced the native Indians (who never had to deal with the pests) and brought roaches to every part of the country. Then, through our beloved globalized commerce, we spread our roaches around the world. Like the ideals of democracy and freedom, American cockroaches have proliferated in every inhabited corner of the globe, with the notable exception of the deserts of the Middle East.

In addition to being the largest roaches on earth, Periplaneta Americana is also among the world’s fastest animals, able to run up to 50 lengths per second. That’s the equivalent of a human running 210 mph. Which is just horrifying. They’ll eat just about anything, but prefer foods that humans think are cool. Per Wikipedia: “American cockroaches are omnivorous and opportunistic feeders that eat a great variety of materials such as cheese, beer, and bakery products…” So like us! No wonder they like to hang out on in Columbia Heights, Shaw, and LeBloomingdroit.

It should come as no surprise that the German variety of roach is better engineered and more efficient than the American. Blatella Germanica is the great tenant roach, the one most widely associated with infesting human dwellings. Many a Washington bathroom is filled with Germans and probably always will be, because these little guys are nearly impossible to eradicate. They can survive on water and soap alone (they also like toothpaste) and fit into cracks and cavities too small for most humans to see. Mostly nocturnal, these little bastards emit an unpleasant odor when they’re frightened. But thankfully they’re tiny and cannot fly, so they’re usually more of an annoyance than a crisis.

Uninhibited, the Germans are the kinkiest, most sex-positive of the roach family. They achieve sexual maturity in a matter of weeks and reproduce more rapidly and in greater abundance than any other roach; they roll their compound eyes at traditionalist attempts to slut-shame them. Humorously, Americans, Canadians, and Britons calls them German cockroaches, whereas Germans call them Russian cockroaches. I’m not sure what the Russians call them, perhaps comrades.

Though I often see them on the sidewalks and in the showers of Washington, cockroaches of all varieties will never cease to terrify me on a base level. Part of this is that I didn’t grow up with them; until moving to Washington in my twenties, I had never seen one in person. We definitely have them in the Midwest, but like all Midwesterners, they know their place and would never be so forward as to show themselves in public and risk upsetting strangers.

As a little kid I heard that cockroaches are the only creatures that can survive a nuclear blast. I took that to heart and, having never seen one, I got the impression that roaches were un-killable superbugs. And since I knew that they can fit into virtually any crack, I assumed that these superbugs were flat and armored enough to withstand a human’s heavy foot. In my mind, they were invincible.

The first time I saw one in Washington, I was walking on 14th Street at night with some friends. It scurried across the sidewalk and I freaked out, jumping back and letting out a primeval wail as one of my friends crushed it into goo. My fight or flight instincts took hold, and it took me a moment to get my bearings. Tuning out everyone’s laughter, I looked at the mangled roach and exclaimed you can do that?! You can just kill them! My friends still make fun of me for that, and I deserve it. No matter. That cockroaches can be killed so easily was and is a huge relief.

So the next time you see a cockroach skittering across a sidewalk, stomp that American fucker to death!