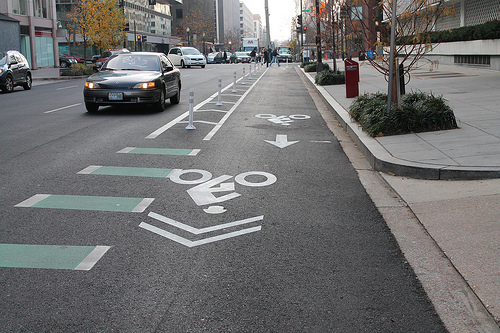 Should Christians be allowed to pray in bike lanes?

Today the Post asked whether people should jog in DC’s bike lanes. The very notion sparked outrage and derision from DC’s cycling community, which already has to contend with police officers and supply trucks using bike lanes as parking spots. Keep the joggers on the sidewalk where they belong, echoed Washington’s bikers.

But what about Christians? Should members of the popular religious sect be allowed to pray in DC’s bike lanes?

The District Department of Transportation says no. Bike lanes are legally reserved for two-wheeled vehicles; anyone else is subject to a $10 fine. But is that religious discrimination? Some Christian groups think so.

“This DDOT mandate is yet another attack on religious liberty,” said a local pastor. “The Constitution guarantees free exercise of religion in this country. Who is DDOT to supersede God and man’s law?”

The Washington Area Bicyclist’s Association disagrees. “Praying in bike lanes is a threat to bikers and Christians alike,” said a WABA spokesperson who also identifies as a Lutheran.

There’s no doubt that people praying in a bike lane is frustrating for cyclists. But there are compelling arguments on both sides. Local Christians argue that it’s too dangerous to pray in the streets and too crowded to pray on the sidewalks. Where else are they supposed to go?

And if he gets hit by a speeding biker?

The debate is likely to continue. As of press time, Republican presidential candidate Mike Huckabee is considering holding a rally in the M Street Bike Lane to bring attention to the cause and his floundering campaign.