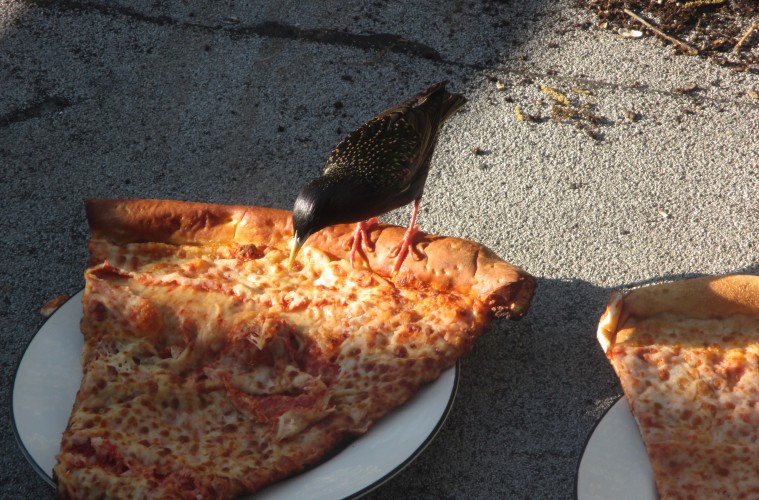 It seemed like a foolproof plan for a listicle. I walked to Adams Morgan last week and purchased one cheese Jumbo Slice from each of the three esteemed Jumbo Slice joints on 18th Street. First I popped into Pizza Boli’s, which bills itself as the “original Jumbo Slice.”

Next I stopped in Pizza Mart, which alleges to serve the the “real original Jumbo Slice” and also the “oldest Jumbo Slice.” 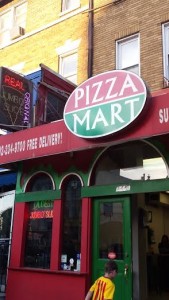 The third place, Jumbo Slice Pizza, makes no such claims of originality or superiority. 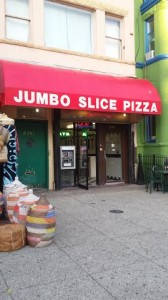 The three slices  looked about the same, equally gigantic and unappealing. But surely one would prove better than the others. Historians will continue to debate which Jumbo Slice purveyor first graced Adams Morgan. But the better question is: which Jumbo Slice is best? Which would win in a blind taste test? I aimed to find out.

Now, I know what you’re thinking: this guy is going to subject his organs to three of those massive crimes against pizza? That’s even more disgusting than when he drank all that standing water! And you’d be right, if I’d put those pizzabominations anywhere near my mouth. I may enjoy guzzling a glass from the Reflecting Pool, but I have my dignity. Not only would I never eat a Jumbo Slice, I wouldn’t let another human being eat one if I could stop them. So to determine which Jumbo Slice is most edible, I turned to the ultimate arbiter: nature.

I placed each greasy piece on a plate and set them outside on my balcony. 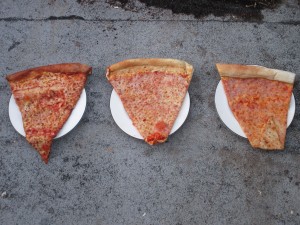 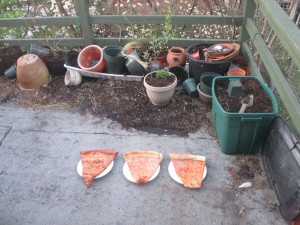 The plan was to sit by my window for a few hours, watching and taking notes as animals discovered and devoured the pizza. I would then rank the slices by how popular they were with the wildlife. I’d envisioned a rollicking listicle full of pictures of squirrels and sparrows trying in vain to carry away pizza three times their size. It was to be titled: Adams Morgan Jumbo Slices, Ranked By Birds and Squirrels. It would have been absurd and delightful. There was just one problem: Jumbo Slice is so damn shitty that not even birds and squirrels will eat it.

I sat there for hours as they flew and ran past, seemingly oblivious to the Jumbo Slice bounty I’d bought for them (worst $16 I ever spent). They just haven’t found it yet, I told myself. About three hours in, a squirrel sat on the balcony railing and stared at the pizza below for a long time, but then thought better of it. 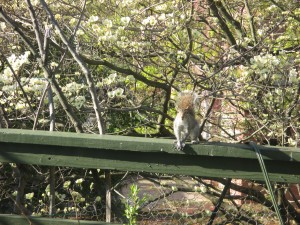 Fuck, I thought, this isn’t working. But I had nothing better to do on a beautiful spring Saturday than watch animals not eat shitty food, so I decided to stick with it and wait it out. Surely they would come. About four hours in, my patience was rewarded. A starling swooped in and stood before the slices, my first critter customer. 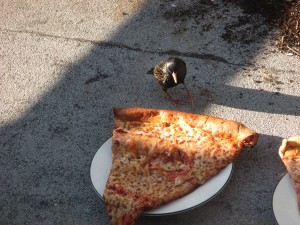 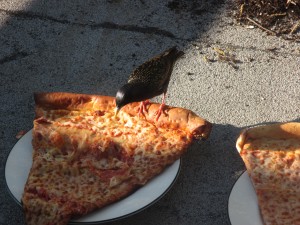 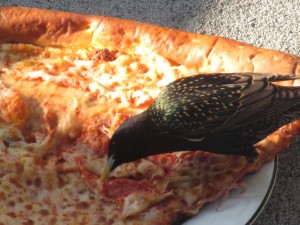 Success! I thought. Pizza Boli’s taking an early lead among the avian set. But after the first bite, the bird cocked its head and looked at the pizza suspiciously, like something was wrong with it, like someone was playing a trick. Then it just flew away, a big fuck you to my free food. He’ll be back, I whispered to myself. And then the waiting game continued as the sun started hitting the pizza, warming it and making it sweat. 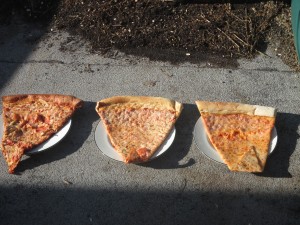 Eventually another squirrel came by and gave the pizza a look. As I fumbled for my camera, the little bastard sniffed Slice 3 from Jumbo Slice Pizza and thought better of it, jumping back onto the balcony railing before I could get a shot. Apparently annoyed by my bullshit, the little fella then ran towards the window and jumped on a branch, staring me down for over a minute, as if to say: The fuck is wrong with you, man? You trying to kill me? He had a point. 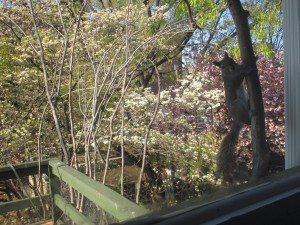 Another hour went by with no action, no return starling, no nothing. I just need to give it a break, I thought. If I go away for a while, they’re sure to come. So I left for a few hours, letting the Jumbo Slices bake in the sun. But when I came back, they were still just sitting there, untouched. 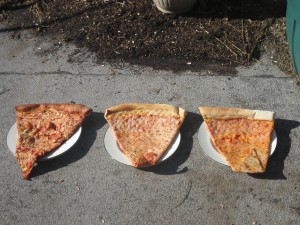 Sure, I felt like an idiot. But I didn’t blame myself. No, it wasn’t my fault for assuming animals would eat free pizza, like that celebrity rat in the New York subway. It was the Jumbo Slice places’ fault for making pizza too disgusting even for rodent consumption. I didn’t bother to throw the pizza away after that long failed experiment of a day. It’s not like I was worried about attracting rats or mice; if anything, Jumbo Slice would deter pests from approaching my balcony.

So the pizza just sat out there for days, getting harder and harder. I never even saw flies show any interest. Maybe a week later, I re-examined the slices and saw that there had been some activity. Slice 1 from Pizza Boli’s had been moved off its plate a bit and had a small hole eaten through it. A nibble and nothing more. 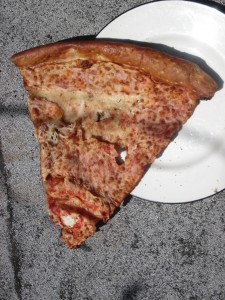 Slice 2 from Pizza Mart also had a little hole eaten through it and had a section of cheese removed, right next to a spot of bird shit. 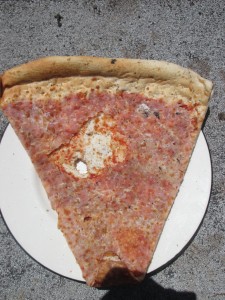 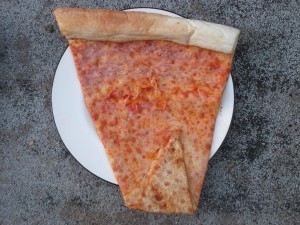 So there you have it. Birds prefer Pizza Boli’s and Pizza Mart to Jumbo Slice Pizza, but aren’t very fond of any of them. Squirrels, who have a much larger brain than birds, are smart enough to avoid Jumbo Slice completely. In conclusion, I guess I should have gotten the birds and squirrels drunk first. Maybe if they’d been fucked up, they would have been more like the disgusting mammals who wolf down Jumbo Slice every Friday and Saturday night in Adams Morgan, like it’s food or something.