Washington has by far the worst collection of college and pro sports team names in the country, and not just because one of them is a racial slur. These are DC’s terrible team names, ranked:

One of the few that isn’t terrible. Bison is a strong name for any athletic outfit. The animals are mighty beasts that run together like a team, and they make for great logo possibilities. But it’s an especially good name for a historically black institution like Howard. As legend has it, they were named in honor of the Buffalo Soldiers, the proud, all-black army regiments that were formed after the Civil War, at the same time Howard was founded. This gives Bison added relevance and meaning and makes it easily the best team name in the District.

Unlike almost all the others on this list, Hoyas is an original moniker that relates to the organization’s unique history. The term “Hoya” is half of Georgetown’s trademark “Hoya Saxa!” cheer, coined on campus in the late nineteenth century; the “Hoya” comes from the Greek for “what” or “such” while the “Saxa” is Latin for “stones” or “rocks.” “Hoya Saxa!” or “What rocks!” is thought to refer to the stone wall that surrounds campus, and was also applied to the defensive character of the Georgetown baseball team, once nicknamed the Stonewalls. By the 1920s, a school sports newspaper called The Hoya had sprung up and by the 1928, they were referring to all the school’s teams as The Hoyas. It’s definitely a strange name. But strange and unique is a helluva lot better than bland or embarrassing.

As an alum, the Colonials team name is one of the few things I don’t hate about George Washington University. It just fits so well–what better school to celebrate the legacy of colonialism than GW?

Cardinals is one of the more common team names in American sports, but it’s especially germane to Catholic, where it forms an alliterative religious pun.

Bison is a strong name for any athletic outfit. The animals are mighty beasts that run together like a team, and they make for great logo possibil–wait a minute, wait a minute. Gallaudet are the Bison too? You’re telling me that a school located less than a mile from Howard chose the same exact team name? What the hell is that about?

I found that Gallaudet’s teams were originally called the Kendalls after Amos Kendall, the man who founded the school. In the early twentieth century they became known as the Blues, but during the 30s and early 40s students complained that that name wasn’t tough enough. So a writer for the school newspaper proposed they change it to the Blue Bisons and it stuck (later becoming just Bison in the 50s). Bison is a fine name, as I’ve said, but I have to downgrade Gallaudet considerably for ripping off Howard, who have a much more original and meaningful claim on the title.

When DC’s WNBA franchise was inaugurated in the late nineties, they were lazily named a non-gendered version of their NBA counterparts, the Wizards. And Mystics is an okay name, I guess. I just think it was a huge missed opportunity to make one of the best names in all of American sports: the Washington Witches. I know, I know, there’s no way the politically correct powers that be would allow for a women’s team to be named something used as a gender pejorative. But how badass of a feminist statement would it have been to own the term? It’s alliterative, original, and intimidating, all qualities that make up a great team name. No one wants to fuck with witches.

Unfortunately the University of the District of Columbia’s mascot is not a 1973 Pontiac Firebird. It’s just a regular old bird engulfed in flames. Why, I don’t know. I’ve never seen one of those in Van Ness.

The Wizards basketball franchise was called the Bullets from 1963 until 1997, when owner Abe Pollin decided to change the name because of its negative association with gun violence in a city ravaged by it. As Dan Steinberg recounted in the DC Sports Bog, the team held a naming contest run by Boston Market and received thousands of suggestions, but the finalists were all duds. Ownership chose between Sea Dogs, Express, Stallions, Dragons, and Wizards, none of which have a god damned thing to do with Washington or basketball. When Wizards won the day, the president of the DC NAACP said it recalled the KKK. But Abe Pollin loved it. “It’s magic, it’s flamboyant, smart, and a winner,” he said. Almost no one agreed.

The Nationals is the perfect meaningless team name for a boring franchise that plays in the most generic stadium in baseball. The reason it’s higher than the next three insipid entries on this list is that it at least has some history behind it. The Nationals is an homage to the official name of Washington’s American League baseball team from 1901-1960. They were known to all as the Senators, and were one of the shittiest ballclubs of the twentieth century. Their official Nationals name was so dull they coined a better one and used it exclusively.

The name could have been so much better, while still honoring DC baseball heritage. Good DC baseball heritage. Mayor Anthony Williams wanted to name them the Washington Grays, an homage to the greatest team DC has ever known, the Negro League powerhouse Homestead Grays, who played in the capital from 1929-1950. The Nationals/Senators won 1 championship in 60 seasons and had a bad team name; the Grays won a remarkable 11 championships in just 22 seasons and had a good team name. The organization chose the former. With that kind of judgement, is it any surprise they’ve never won a playoff series?

Wait, which American university? Oh, The American University. With such a comically generic school name, it’s no surprise their team name is equally uninspired. The American Eagles. Who could have seen that coming? At least they’re not called the Americans.

Why think of a team name at all, when you can just rip off what they do in Europe? Isn’t that the spirit of the MLS? The United name apes Manchester and Leeds United from the EPL and has the added “bonus” of sharing the first half of our country’s name.

Abe Pollin just wasn’t very clever. The man who named the Washington Wizards also had a name-the-team contest in the mid-seventies for his new Washington hockey franchise. He chose Capitals. Because they play in the capital.

Who knew that Washington had a professional rugby team? Established in 2003, the Slayers play their home games at Duke Ellington Field in Georgetown and moonlight as a Slayer cover band at Mr. Smith’s on weekends. Their name is needlessly violent and has nothing to do with Washington or rugby.

Only a divisive racial epithet could keep the Kastles from being the city’s worst team name. The Washington Kastles are the District’s successful professional tennis team, but their name is a crass corporate embarrassment. Kastles, a stupid misspelling of Castles, is a dumb name generally. But it’s all the worse when you learn that they’re named after Kastle Systems, the office security company that makes many of the badges Washingtonians wear to work. They’re owned by the same CEO, who probably thinks he’s actualizing some paradigm-shifting tennis-office security synergy.

I could editorialize about the worst team name in all of American professional sports, but you’ve heard it all before, so I’m just going to end this listicle with this great sticker you see stuck around Washington: 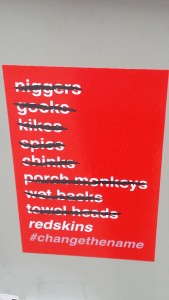