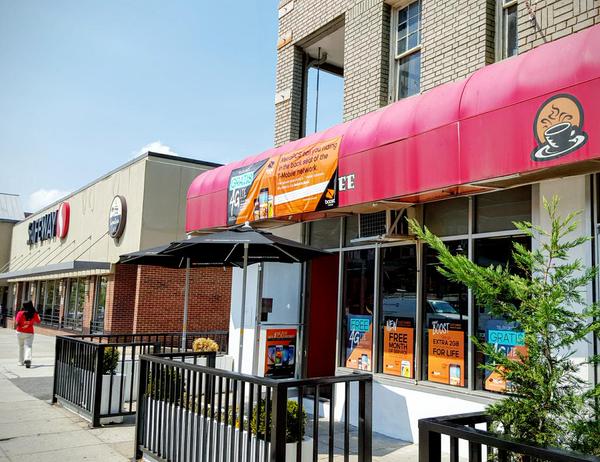 My friend Chris is an early riser who enjoys reading the Post in coffee shops on Saturday mornings. His paper is also the perfect cover, allowing him to eavesdrop on his fellow customers and District denizens, an endless source of insight and amusement. He recently spent his AM in Crumbs and Coffee on Columbia Road and took in the scene, a microcosm of the evolving Adams Morgan neighborhood.

This is his dispatch:

6:30: When I arrive at Crumbs and Coffee with my newspapers, I’m the only customer in the shop. I buy a cup, take a seat, and crack the Post.

6:45: Latino men dressed for manual labor start to file into the cafe and order hearty breakfasts of eggs and beans. By 7, there are about ten of them sitting together, the sounds of Spanish and laughter echoing through the shop. They seem like they’re having a good time.

7:30: The Latino laborers have left for their various jobs and have been replaced by a number of older Latino men and women, who sip coffee from styrofoam cups and converse warmly in Spanish. I discern talk of grandchildren, a recent birth, and plans for the weekend. They all know the woman behind the counter, they are regulars. I remain the only white customer of the day so far.

8:00: A white woman in her late 30s wearing yoga pants wheels an expensive stroller into the cafe, trailed by her husband, who is on the phone. The woman loudly asks her husband what looks good on the menu and he points at something, annoyed by the interruption. She orders two complicated cups of coffee and a number of pastries. As they wait for their coffee and food, the toddler begins to cry and screech. The father steps outside to better focus on his phone call while the mother coos at the boy in a failed attempt to calm him. The older hispanic patrons watch this scene in silence; one of the women gets up and limps out the door.

8:30: One by one, other white coffee drinkers filter in and place their orders while, one by one, the older Latino customers filter out, saying goodbye to the barista. By 9, the latter are all gone and the cafe is dotted with only white people, most of whom are on laptops. English fills the space; the woman behind the counter is the only brown person left.

9:00: A white man and woman in their twenties wearing last night’s club clothes enter and order lattes. The woman objects to the store’s $5 credit card minimum, explaining that she doesn’t have any cash. The man offers to buy both drinks with his card. The woman sighs and says he doesn’t have to, that they can just go to Starbucks down the block, but the man insists.

9:05: The pair sits near me and I listen in as they discuss the previous night out, how drunk they got, how shitty they feel right now, and how worth it it is was. The woman asks if the man ended up leaving with that hot guy and he says no, he ended up leaving with a different guy. They share a laugh. Then the woman complains about her bagel and says she may as well have gone to Safeway.

9:15: A twenty-something woman in yoga pants comes in, trailed by two baby boomers who are clearly her parents. I can tell they’re Midwestern, even before I see the dad’s Michigan State tee. As they wait in line, behind three other white people, I hear the daughter tell her parents that Crumbs and Coffee is a “hidden gem” that “most people in the neighborhood don’t know about.” That’s when I got the hell out of there.

Crumbs and Coffee closed shortly thereafter. It will be replaced by another phone retailer.