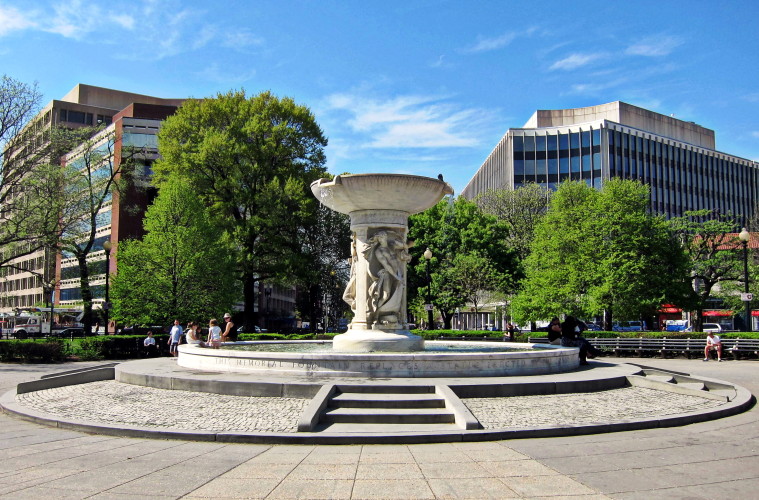 The name DuPont Circle, like Logan and anachronistic Truxton, is most often used as a synecdoche, a moniker for the entire neighborhood surrounding the central traffic circle. But in this case, when I write of 3.6 hours in DuPont Circle, I don’t mean you should have a coffee at Firehook, brunch at Kramerbooks, and a beer at The Big Hunt. No, I’m talking about DuPont Circle, the iconic park in the middle of it all. Here you’ll find a unique urban ecosystem that affords hours’ worth of voyeuristic entertainment.

You’ll find no trace of Rear Admiral Samuel Francis DuPont in the park and circle that bear his name; his statue was exiled to Delaware in 1921 and replaced with the current fountain, a striking sculpture. Take an obligatory stroll through the park’s center and check it out, sit at its edge for a sec, and make a wish, maybe for fewer rats in the surrounding hedges.

If you stay near the fountain, you’ll likely be serenaded by a busker of one stripe or another, but the best music in DuPont doesn’t come from live performances. It comes from the battery-powered boomboxes of the old regulars who sit at the park’s outer edge, smoking and blasting an awesome assemblage of funk, soul, blues, jazz, and pop, a veritable tour of twentieth century black music, which we can all agree is the best music. You definitely want to sit within earshot to have a soundtrack for your park hang. The western half of the circle is fairly blasé, full of meek book readers, swarthy sun bathers, and insufferable couples. You want to be where the action is, and that’s the northeast corner of the outer ring, across from the north side of New Hampshire Avenue, where the chess tables are found.

One of DuPont’s richest charms is its outdoor chess tables. On a weekend afternoon, you’ll find several heated games between incongruous competitors; bouncy little kids take on old homeless vets and upper class think tank geeks battle bald retirees as crowds of spectators flank the tables. That’s the beauty of outdoor chess: origins mean nothing, it’s all about how you play. The corporate CFO don’t mean shit in this park if he can’t tell his Scheveningen Variation from his Sveshnikov. Some of the best players you’ll find in DuPont have home field advantage, in that they live in the park. It’s ultimately tragic of course, to see such periodic brilliance arise out of such wretchedly destitute lives. You’ll wonder what could have been, but should wonder what will be when the crowds are gone and night—and the temperature—begin to fall.

If you’re bold or stupid enough, get in a game. Or look for the next Bobby Fischer, hopefully without the ranting anti-Semitism. If you’re lucky, you’ll get to watch Tom Murphy play or coach, a true DuPont delight. Murphy is the undisputed king of the DuPont chess court, a formerly-homeless champion whose blitz play is known up and down the East Coast.

If the tables aren’t too crowded, grab a free one and play your own game. Or if chess isn’t your bag, bring Scrabble or Settlers of Catan or whatever else. Outdoor board games on a sunny day are twice as nice, so much better than the clamor and fees of the Board Room up the street. And it’s not like you can’t sneak a few drinks in the park. If you’ve got a backpack, you can get away with pretty much anything.

Ultimately, the joy of DuPont Circle Park, like just about any public space, is people watching, reality vision. You could spend hours sitting on a bench, watching the world go by. And you should.

Every type of Washingtonian filters through the park. You’ll watch nervy first dates and the occasional cataclysmic outdoor breakup (DuPont Circle seems to attract public criers). You’ll see unabashed makeouts, the occasional fight, and no shortage of listless teens. Gawk at exercisers, dog walkers, and pigeons tame enough to kick. Try to hit a rat with a rock. Pick up on assorted snippets of conversations and try to form your own endings, or try and guess a person’s backstory based on their appearance and bearing. Every afternoon is a human grab bag.

The last time I sat in DuPont and watched my fellow man, I caught wind of some illicit mercantile activity, top notch entertainment. A heavyset black guy in a New York Knicks jacket sat on a bench with a backpack at his feet for hours, smoking cigarillos and shooting the shit with his buddies. Every five or ten minutes a new strung out skinny white dude would sidle over, all darty eyes and sweaty brow. The Knickerbocker would reach in his backpack and make a lightning quick exchange of hands, with money and baggies and palms melding into a transaction. And then the buyer would practically sprint away as the dealer checked his peripherals for law enforcement that was never to be found. And this, in broad daylight! You never know what you’ll see in DuPont Circle if you take the time to look.

Now, some may baulk at the constant presence of homeless and otherwise destitute park dwellers, but get over it. Instead of avoiding the homeless, you should consider their setting and try to imagine what their world is like. The contrast between the park’s many monied millennials and the people who sleep here is an instructive reminder of the structural inequality that pervades our capital because of choices about capital made in the Capitol. When you think about your status, your relative ranking in the world, you consider it in terms of those above you, the ones you’re chasing, don’t you? Try it the other way around. It may be enlightening.

If you’re not one to sit in a park for hours watching the wanton world and contemplating the harsh realities of the society that surrounds you, well, then I recommend you just get a coffee at the Firehook, have brunch at Kramerbooks, and then get a beer at the Big Hunt. Because DuPont Circle is not for you.