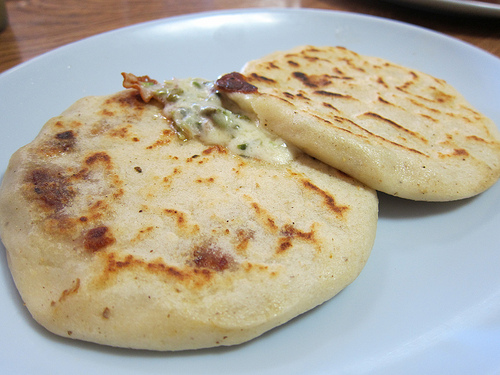 An interview with the man behind Washington’s newest pupuseria

A new locally-owned pupuseria called By the Pipil, For the People is slated to open on Mt. Pleasant St. NW between Kilbourne and Kenyon sometime in early October. Authentic Salvadoran fare has thrived in this corridor over the past decade, but until now, there hasn’t been an establishment owned by a restaurateur native to the DMV. Andrew Davis, 33, of Potomac, Maryland, is changing that and hoping to “bring Salvadoran into the mainstream.”

Stuck in DC recently interviewed Mr. Davis about By the Pipil, for the People and what he hopes to bring to Washington’s thriving culinary scene.

Andrew, thanks for your time, this is actually Stuck in DC’s first restaurateur interview.

You’re welcome! This is actually my first restaurant, so it fits.

Let’s start with the name. It’s a little obscure, By the Pipil, For the People. What does that mean?

It’s definitely a little obscure, but I’ve fallen in love with it and I think Mt. Pleasant will too. The Pipil are an indigenous Salvadoran ethnic group that thrived in Western El Salvador before the Spanish Conquest. Much of the Salvadoran population today counts the Pipil among their ancestors, and their traditions and recipes have certainly made a big impact on Salvadoran cuisine. But most Americans don’t know the first thing about Salvadoran food and I want to change that. At its core, this restaurant will be about expanding the bounds of traditional Salvadoran food. Food from the Pipil of El Salvador for all of the people of DC.

Tell us about your background and how you got into Salvadoran food.

I was raised in Potomac, Maryland, so I consider Washington home. When I was growing up, I had a wonderful Salvadoran nanny named Maria who made the most incredible food for our family. While most kids my age were eating chicken tenders and macaroni, I was eating lomo entomatado and yuca frita. Salvadorian food is in my blood.

When did you know you wanted to open a restaurant?

In college. Leaving home for school in Philly was really tough. Penn was great, but there was no good Salvadoran food in the city. When you were raised on panes rellenos, a cheesesteak doesn’t do much for you. So I studied abroad in San Salvador and did mission trips to Honduras and Costa Rica. Cross culturalism is like pollination. Think of a bee, spreading pollen from flower to flower, across different yards. Each flower is like a culture, and I want to be that bee. I want to expose as many people in DC to authentic Salvadoran food as possible.

It’s sad, but a lot of Americans don’t feel comfortable walking into a Salvadoran restaurant. There’s Spanish on the sign, it’s small, there’s Latin American soccer on the TV–it just turns a lot of people off, and no one wins. I want to make this wonderful food more accessible to American diners. I hate to see people buying their pupusas from the Safeway in Adams Morgan. If you’re microwaving your Salvadoran cuisine, you’re doing it wrong. Come to the restaurant instead.

How do you respond to critics who say your food isn’t authentic?

Authenticity is a tricky concept I think. A lot of people are going to look for reasons to complain about new businesses, even though they never went to the old ones. But it’s like I said, I grew up with this food, I spread its popularity in college, and now I want to make it even bigger. This food is by the Pipil, for the people. The more mouths that experience Salvadoran food, the better it is for Salvadoran food generally. And we’re still going to have plenty of native Latin Americans working in the restaurant, I assure you.

What kind of prices are we talking?

Pupusas are $9 and come with a side of beans.